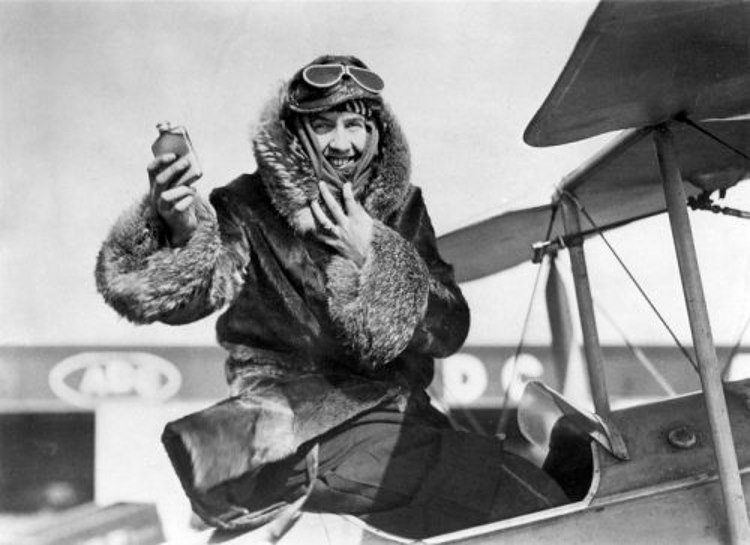 One hundred years ago, when male aviators flew only with ham sandwiches and hard boiled eggs, Sophie Heath, the first Irish woman to parachute from an airplane and the first to land in the middle of a football(soccer)match, piloted a tiny open-cockpit airplane from Cape Town, South Africa to London with a Bible, shotgun, a couple tennis rackets, six tea gowns and a fur coat. One of the best known women in the world during the 1920’s, “Britain’s Lady Lindy,” as she was known in the U.S. was the first pilot, male or female, to make that flight.
”A woman can fly across Africa wearing a Parisian frock and keeping her nose powdered all the way.”
—Lady Sophie Mary Heath (1897-1939)

Having the most tragic start in life, a beginning too horrible to consider, Sophie Catherine Theresa Mary Peirce-Evans, was born on the November 10th, 1896. While a toddler, her father beat her mother to death leaving little Sophie alone for hours with her mother’s body. John Pierce-Evans was found guilty but insane and imprisoned, and Sophie was brought to live with her Grandfather. She showed an early talent and passion for sports, but her aunts forbid this ‘unladylike’ behavior. Sophie finally went to school in Dublin, where she could play hockey and tennis. One of very few women at the Royal College of Science in Ireland, she earned a degree in science specializing in agriculture, and she played hockey. During World War I, Sophie worked in England and France as a dispatch rider; her aunts were aghast, writing to relatives: “For Mercy’s sake, don’t let Sophie get hold of the girls.”
Moving to London in 1922, she helped found the Women’s Amateur Athletic Association, promoting a full women’s program at the Olympics and becoming a delegate to the International Olympic Council. She published “Athletics for Women and Girls” and by 1926 was representing the UK in Track and Field at the Women’s International Games; she set a world record for the High Jump and became the first women’s javelin champion in Britain. Her records for the shot-put and discus were not broken until the 1960’s.
It was then that Sophie took her first flying lessons, which unleashed a burning passion for aviation. During the latter half of the 1920’s, Sophie was the most famous Irish woman on the planet, fighting prejudice and ignorance to become the first woman in the UK to get a commercial pilot’s license. Her test included proving to a panel of men that she could control an aircraft at “at all times of the month”.
Sophie had already set a number of altitude records when she married Sir James Heath in October of 1927. Lady Heath landed in the middle of a football match after becoming the first British woman to parachute from a plane, and in 1927, the first female pilot to win an open race. In July 1929, she wrote an article for Scientific American magazine, entitled ‘Is Flying Safe?’. Sophie would once gain experience tragedy when just before the National Air Races in 1929, she was badly injured in a plane crash. Lady Heath would never be the same after her accident.
Running her own company near Dublin into the mid-1930’s, helping produce a generation of pilots, and creating Aer Lingus airlines, Sophie Catherine Theresa Mary Peirce-Evans, the great Lady Mary Heath at the age of 42, died of head injury following a fall on a tramcar in 1939; the fall was thought to have been caused by an old blood clot from the 1929 crash.
Her ashes were scattered over Surrey from an airplane flown by her husband although legend has it that her ashes were returned to Ireland and scattered over her native Newcastle West.

Welcome to: Ladies of Skydiving